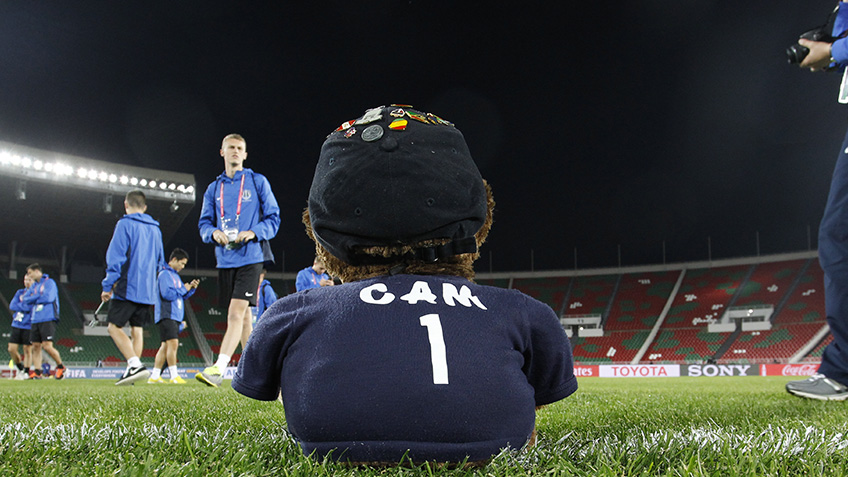 The story of Auckland City FC mascot known simply as: "Cam the Kiwi"

"Cam the Kiwi" first travelled with the Navy Blues when the club participated at the Oceania Club Championships in June 2005.

It is a club tradition for the youngest squad member to act as Cam's minder whenever the team travels away. On this first trip however he was a mascot without a name and it wasn't until nearly eighteen months later that he was officially 'christened'.

The team had won it's second successive NZFC title, had been crowned champions of Oceania and were heading for their first ever appearance at the FIFA Club World Cup in Japan in December 2006.

This historic milestone moment was tinged with sadness as one loyal Navy Blues fan, who had travelled the length and breadth of New Zealand following the club, couldn't make the journey to the Land of the Rising Sun.

Cameron Jones, or "Big Cam" as he was affectionately known, was one of the founders of the Auckland City FC Supporters Club and was without doubt it's driving force.

Only in his mid-thirties, Cam had been battling cancer for the previous ten months and was not well enough to travel and support the team when they departed for the club's exciting foray into global competition.

As a tribute to Cameron Jones and his loyal backing of the team, the players christened their mascot in his honour, thus "Cam the Kiwi" was born.

It was a dream of Cameron's for Auckland City FC to play on the world stage and it was fitting he was able to see this become a reality, albeit on television back in Auckland. Sadly, only a few weeks later on 30 December 2006, Cam passed away.

Cameron Jones was a gentle giant who was loved by everyone at Auckland City FC and he was admired for the strength and courage he displayed as he battled his illness. Always friendly and obliging he was a great guy to have around the club.

In 2007 the club renamed our annual Supporter of the Year Award in his honour and it is now known as "Cameron Jones Memorial Award".

Through "Cam the Kiwi" his great spirit lives on as does his support wherever Auckland City FC may be playing.

The original "Cam the Kiwi" mascot was lost on duty following the end of the FIFA Club World Cup campaign in Morocco in 2013 after many years and thousands of kilometres travel, but a brand new replacement featuring many of the club and national association badges was produced, and like Cameron Jones himself, his memory and legend continues.